Whether you favor nature or nurture, the person you are today was inevitably shaped to some extent by the events of your childhood. And if you’re like most people in the Western World, you spent most of your formative years inside a school building.

Theoretically speaking, those years in grade school are intended to set us up to move on to some form of higher education, from whence we proceed to gainful, fulfilling employment and become good employees and citizens who productively contribute to society.

But, according to Phil Jarvis, school days as they currently exist for youth aren’t setting us up for success in today’s real world of work.

Jarvis is the Founding President of Transitions Canada Coalition, a not-for-profit coalition of youth, education, business, government, and civic leaders working to help K-12 students get ready for their lives and careers.

At a recent ThoughtExchange Virtual Event, Helping Students Find Their Why, Jarvis painted a bleak picture of the prospects for today’s American youth and argued that the way we approach their education from the earliest years needs a fundamental rethinking to draw a different picture of their future.

Buried in debt with little to show

“We’re burying the next generation of young people in debt while forfeiting their talent,” Jarvis says. “US student loan debt has now reached 1.5 trillion… and six of ten students who start a public or private college program will not have a degree after six years.”

“They’ve lost precious years and they’re no closer to discovering good career pathways or employers who really need their unique skills and strengths. They’ve got debt, but they didn’t get a sense of direction and purpose, the social and emotional skills, the financial management skills, the character or resilience needed to graduate and get launched in a career that gives them a good return on their investment.” 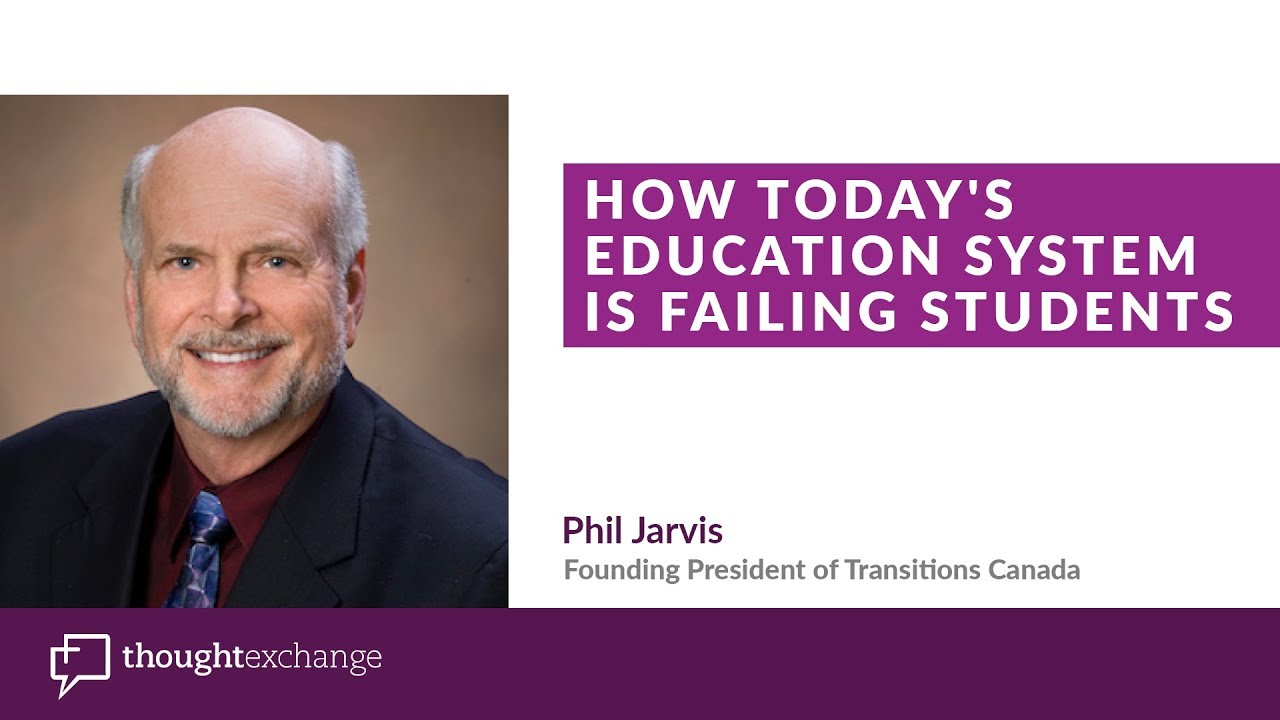 “Lots of graduates are in low-paying, low-security, low-to-no-benefits jobs that are unrelated to their interests, skills or areas of study,” he says. “Many are demoralized, even depressed at trying to imagine how they’ll pay off loans and get out of their parents’ basements to lead happy, fulfilling, independent adult lives.”

He adds that this trend is having a ripple effect on families and communities.

“They can’t buy cars, or homes, build families or get engaged in their communities,” Jarvis says. “Employers don’t get the full benefit of their potential contribution. The human and economic cost of having so many young people failing to launch from school into good middle-class careers is staggering. And we all pay.”

“Why do I need to learn this?”

Jarvis argues that the education system as it currently exists isn’t working, because it’s designed to prepare kids for the next level of education—instead of setting them up for success in the real world.

“The assumption seems to be that when their heads are full enough arbitrary, age-based, prescribed curriculum…kids will be ready to take on adult life,” he says. “The sad reality is most aren’t fully prepared.”

It’s here where seeds of the high levels of disengagement many employers experience in their employees appear to be planted. While 80 percent of students are engaged in their education in primary school, that number consistently plummets to 40 percent or less by high school.

Why is that? “Students seldom get an answer that satisfies them to the question that’s constantly asked: Why do I need to learn this?” Jarvis explains. “It’s no wonder that employee engagement among adults across the country is just (34 percent). People are socially and emotionally disengaged with their jobs.

“Clearly, most of today’s adults were not career ready when they entered the world of work.”

The power of purpose

As Forbes reports, people continue asking for “the why” when they transition from school to work.

“There are several factors that contribute to engagement at work, but one of the most powerful drivers of engagement is purpose,” writes Forbes Contributor, Alexandra Douwes. “According to a study by Imperative, purposeful employees perform better across the board. They are more likely to rise to senior level roles, to be net promoters of their organization, to stay longer, and to have strong relationships with their colleagues.”

According to Jarvis, helping students discover their  “why” early on, is the key to setting them on the path to success, both in life and work. Doing that means helping kids discover their unique strengths and showing them the pathway to a future that looks bright. As such, he says it should be considered the number one job of every educator.

“Every student has the potential to be a prodigy in something, even those who are considered learning challenged or behaviorally incorrigible,” Jarvis says. “We just have to provide them with understanding, acceptance, support, encouragement and yes, the love they need to find their purpose.

“Engagement and achievement will increase when students are exposed to adult jobs that deal with issues they care about, or highlight careers they find intriguing. Students begin to have visions of possible futures that excite them. Anything becomes possible. And engagement skyrockets.”

He adds that this engagement and vision of future happiness can aid in brain development, reduce behavior problems, increase teacher satisfaction, and get parents more engaged.

“Why would we not want to transform education to benefit all students and society in general?” he asks. “Helping students find their why can begin in Kindergarten.”

Check out the Virtual Event Replay to hear more for Phil Jarvis, along with the World of Work solutions framework from Ed Hidalgo, Chief Innovation and Engagement Officer at Cajon Valley Union School District.