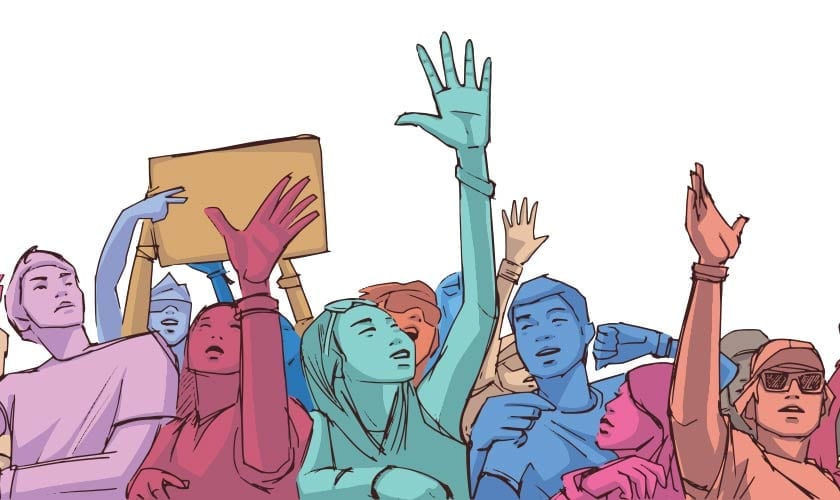 When Benje Choucroun, 13, spoke up at a White House press meeting, both his courage and words were stunningly memorable.

“At my school, we recently had a lockdown drill. One thing that affects mine and others’ mental health is the worry that we or our friends could get shot at school,” the Marin Country Day School student told the press.

The connection Benje made between mental health and student safety is complex. Even now, despite some healthy discussion, many kids are still having negative experiences at school.

The recent school shootings across the country and subsequent nationwide protests have made safety discussions a top priority in every school district and community.

Students have been speaking out, calling for those in charge to implement change in the institutions where they spend so much time. Much like their teachers and the other adults with whom they share school buildings, students take their worries home with them each night.

These kids deserve to have their voices amplified and their experiences understood. The international attention many of them have received further underlines how essential it is they play a key role in the dialogue around school safety.

Inviting students from every part of the school community to add their voice is critical. It’s especially important to include those students from whom teachers and principals rarely hear. Without broad and diverse opinions to form a thorough understanding of students’ experiences, school safety decisions are only partially informed.

Resistance to involving students in school safety discussions comes in part from concerns that talking about violence or danger will increase their existing fears or anxiety.

In reality, it appears the opposite is true. According to Mental Health America, it’s not a matter of if we should talk with students about school safety, it’s how. When carried out well, these conversations actually help ease students’ concerns about personal safety.

The process of empowering students to participate will help them feel less victimized and more secure, according to Michael Dorn, Executive Director of Safe Havens International.

“One of the best forms of security is creating a sense of connection and a sense of the ability of people to talk to one another,” he says. “That can protect us from many types of things.”

The entire picture of what’s really going on inside and outside of the school walls won’t be clear until all students are heard, including the introverts, the disenfranchised, the angry and the hurt.

But this kind of conversation isn’t easy to accomplish, as scale alone makes it a monumental task. The unfolding discussions will likely be uncomfortable at times, but if the kids aren’t part of the discussion, adults can only ever be partially aware of what’s happening.

Creating a safe space for an open, productive discussion

Although there has been no violence in the district, leadership took a proactive approach and engaged its whole community in an open discussion. Because this is such a delicate topic, the MVWSD team decided to launch a Thoughtexchange that let the community confidentially share and collectively prioritize their concerns in an online space before they were invited to carry the dialogue forward at a town hall meeting. The exchange was more tightly moderated than other topics often are to ensure the dialogue remained both safe and productive.

When Dr. Ayindé Rudolph, Superintendent of MVWSD, asked his community ‘What are some important things for us to consider as we work to ensure our schools are safe places for all students to learn?,’ he learned that what was important to parents differed from what mattered most to students.

For example, while parents expressed concerns about safety training, middle school students indicated safety drills are important to them. As one student shared: “We should practice more of those types [of lockdown drills] because we don’t know who’s next.”

According to Dr. Rudolph, a safety discussion including students became a “powerful moment” for his district, and not the emotionally charged ordeal many leaders anticipate.

It’s clear that students see and experience what adults sometimes don’t, especially when it comes to day-to-day life and culture. Their perspectives offer an insider view. As one middle school student commented “Everyone is different. Students can’t be themselves, and sometimes they can get discouraged or put down by other students with hurtful comments or jokes that hurt deep down.”

Student demonstrations and walkouts have sent a clear message to the policymakers: the kids are well past the point of being talked about and at.

Despite significant criticism, student activists like David Hogg of Marjory Stoneman Douglas High School have brought an impressive level of civility and clarity to the issue that many adults have not been willing or able to reach.

As the discussion, awareness and demonstrations continue, safe and open engagement and direct action become increasingly more critical. It may not be possible to completely erase fear around school safety, but opportunities for students’ voices to provide input will help mitigate the anxiety while, at the same time, nurture feelings of confidence, security, and connection.