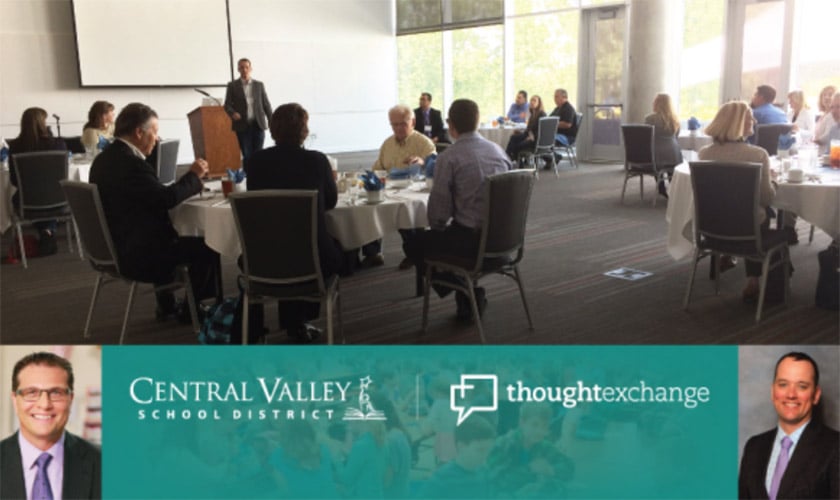 Given the event title, it was no surprise that facility upgrades were top of mind for those in attendance, including superintendents, school board members and parents from a number of local school districts. However, when Thoughtexchange President Dave MacLeod kicked off the session with the question:

“what do you expect to learn from today – and why is it important to you?”

A fast-paced, five-rounds of sharing, shuffling, and scoring responses revealed that the thought valued most by the group was:

And, as it turns out, that very commitment to ongoing community engagement was a fundamental reason for Central Valley’s success.

As we’ve explored in this space earlier, Districts use Thoughtexchange, among other things, to help manage crises, to create and promote a culture of change, and generally to build trust in the administration through listening.

In the financing context, it is critical to avoid having “engagement” with the community begin and end with asking for money and defending the district’s reason for doing so. CVSD Superintendent Ben Small emphasized that Thoughtexchange was not a ‘bond passing tool’, and using it for that sole purpose might not only be ineffective, but could actually damage a District’s efforts to build a relationship with the community.

“If you, as a district or individual, don’t believe in long term community engagement as a means of earning trust and gaining buy-in from your community then Thoughtexchange is not for you.”

Following Ben’s presentation, Dave provided further background on Thoughtexchange and allowed the group to dig deeper into the process, software, and the power of using an online community engagement platform.

“Passing a bond is more than passing a bond. Community engagement is a long term commitment to creating an environment where people want to be engaged and share their thoughts.”

Dave once again led the group in an exercise in which everyone could ask questions. After another five rounds of sharing, shuffling and scoring, questions were clarified and stories were shared. In the end, the group developed an understanding of how Thoughtexchange might work in their own communities.

To close the session – and as Dave says “make it good” – the group was invited to share some final words. Orting School District Superintendent Dr. Marci Shepard provided a perfect closure to the day, saying: “I came here to build a building and I leave wanting to build trust.”

The Spokane event was sponsored by Lydig Construction, as part of its ongoing commitment to community accountability, a cornerstone of Lydig’s corporate philosophy.