“In my not-humble-enough opinion, we (in the business world) generally are pretty bad at teaming, despite our overuse of the word.”

Would you call yourself a team player? Andy Cohan joins us to push past the motivational posters in corner offices and dig into the truth: he thinks today’s business leaders could be much better team players than they are now.

In this virtual event, you’ll learn about…

The values, behaviours, metrics, and feelings you should be focusing on if you want your team to be successful. The best ideas from sports teams, military units, and even orchestras that you can take and apply to your team starting today. Where to begin with transforming your team into an all-star squad.

Can't attend live? Register anyway!
We’ll send out the recording and other resources to all registrants after the event.
We’ll also send you updates about new events; unsubscribe anytime. 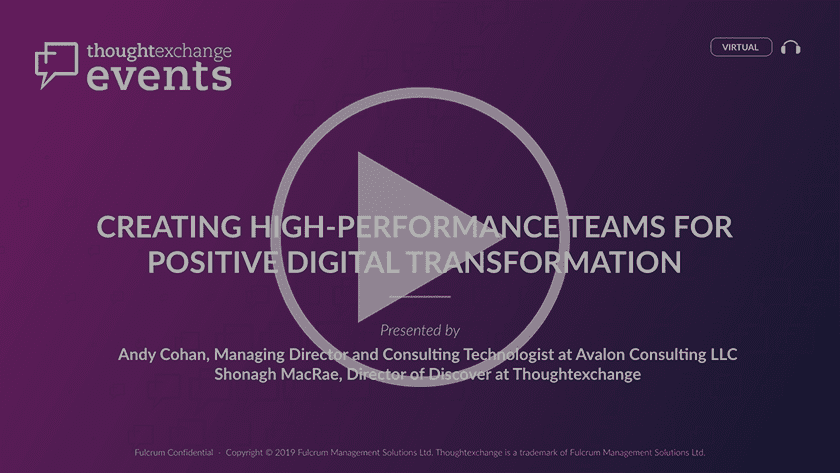 Adapting to Digital Disruption: Why Teams do it Better

What do you think of when you hear the word “team?” You might immediately jump to Sundays in front of the flatscreen, watching a group of athletes playing like a well-oiled machine. It’s also a word we often use to describe our work relationships. In the business world, we throw the “team” around all the time, but can we say that we’re embodying what it means to be “team players?”

Answering these questions is what’s driven Andy Cohan, Practice Director, and Consulting Technologist at Avalon Consulting, to define what makes a team in the business world. His mission is to show organizations how approaching digital disruption from the angle of true teamwork translates into success.

“Oftentimes when we say team, we’re really talking about a group,” says Cohan, and “groups are about a ‘hero model’–a hierarchical, one boss/many staff organizational structure.” People on high-performing teams, on the other hand, set expectations for one another, and the key to their success is that they value team performance over individual achievement, Cohan explains. In a hero model, the reward lies in being distinct from your coworkers; in a team model, the focus shifts to what you create with your coworkers, and how you can strive for excellence together.

Most leaders accept the fast pace of technological advancement, but it can be more difficult to change entrenched leadership practices.

Read why it’s essential here: From Competent to Compassionate: The changing language of leadership

Why is it essential for businesses to embrace the team model? Cohan argues that while hierarchies may have been effective for many centuries, technological innovation has now vastly outpaced the human ability to adapt to it. “Our social animal brains don’t change nearly as fast as technology does now,” says Cohan, and that means we need to take a new approach to the digital disruption that’s become the norm in business.

Cohan explains that teams are more effective at adapting to digital disruption because members can quickly give each other feedback. “The key metric to how well we learn is the amount of time between the behavior and the feedback,” he says. Since teams can give feedback at a faster pace, they’re quicker to learn. He goes on to explain that “learning is actually the most important skill that anybody can bring to a 21st-century technology job.” If we’re always striving to learn, that means we’re better able to keep pace with technological advancements.

From Chief to Coach

In the pivot from hero to team model, leaders may seem to be left in the lurch––but leadership is still essential to the team, Cohan says. It just takes on a different perspective. While the traditional structure of business leadership has been hierarchical, Cohan argues that in a team, “the most effective leaders are the ones who actively share leadership.” Leaders are there to provide the initial direction and motivate the team to stay on target, not to be the authority on the work. A good leader can tap into the skills and strengths that each team member brings to the table and articulate the best direction for them to follow. As Cohan puts it, “they run plays.”

However, since hierarchy is so entrenched in most business models, how do we start changing the structure? Cohan points out that “transformations often start from the bottom up––it is the practitioners, not top leadership, that embrace these ideas first.” He acknowledges that if the company culture is all about heroes and hierarchy, it’s going to be a tough sell. But if you can appeal to your leader’s emotional intelligence, there’s a good chance that they’ll see the benefit of the team model. Listen to their concerns, ask thoughtful questions and be prepared with suggestions that promote organizational learning and “cultivate the group and the connections between them” rather than separate them, Cohan explains.

Thoughtexchange has helped leaders from all sectors adapt to the 21st-century workplace by engaging their employees and taking the conversation from Loud to Crowd.

Read about how Allstate did it here: Allstate: The Leader’s Journey

Once you’ve got leadership on board with teaming, there are tools they can use to make the transition as seamless as possible. Cohan has used Thoughtexchange in his work to help organizations set up team-oriented structures by engaging employees anonymously and honestly. Since the most effective learning comes from hearing from all team members, Thoughtexchange fits seamlessly into the process by allowing teams to crowdsource their approach and the metrics by which they gauge success. Through an exchange, leaders can tap into the values that people want their teams to embody, and gather feedback on how to how to accomplish the team vision.

The best reason for an organization to embrace the team model over the hero model is to inspire and motivate their employees. With a growing millennial workforce, Cohan believes that companies need to be ready to answer younger people’s desire “to be a part of something bigger than (themselves), something meaningful.” Using the word “team” to describe your employees isn’t enough to accomplish that vision. You need to be ready to embrace both the technology of the 21st century and the optimal work environment for human minds that drive it. 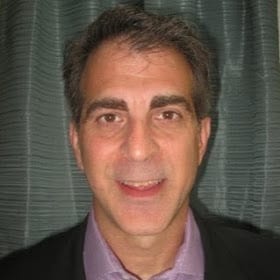 Andy is an energetic leader and designer of systems and software development projects, teams, and architectures with over 30 years experience leading teams and building systems. Andy has proven expertise in designing and deploying custom business information systems as a hands-on systems engineer and architect across a wide variety of platforms and technologies including transactional and analytical databases, big data processing, search and retrieval and more. Andy currently specializes in guiding clients through the currents of digital disruption while they transform their data, content, systems, people and organizations into high-performance assets. Andy has most recently been focused on helping clients navigate their way onto the cloud and containers (primarily Kubernetes), migrate between cloud platforms, and implement NoSQL-based applications including MarkLogic, Couchbase, and Elasticsearch. 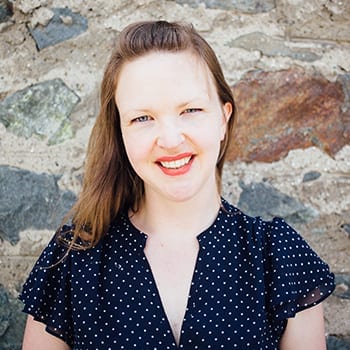 Shonagh describes herself as continually curious about people. This curiosity led her to a Master’s in Organizational Psychology where she learned a whole lot about how humans interact in groups and how to support them. Shonagh has also spent a lot of time in her community supporting at-risk populations. This work further honed her ability to connect with a broad range of personalities. When she’s not working with Thoughtexchange, Shonagh is most often found out in the garden with her hands in the soil.

This event proudly brought to you by: