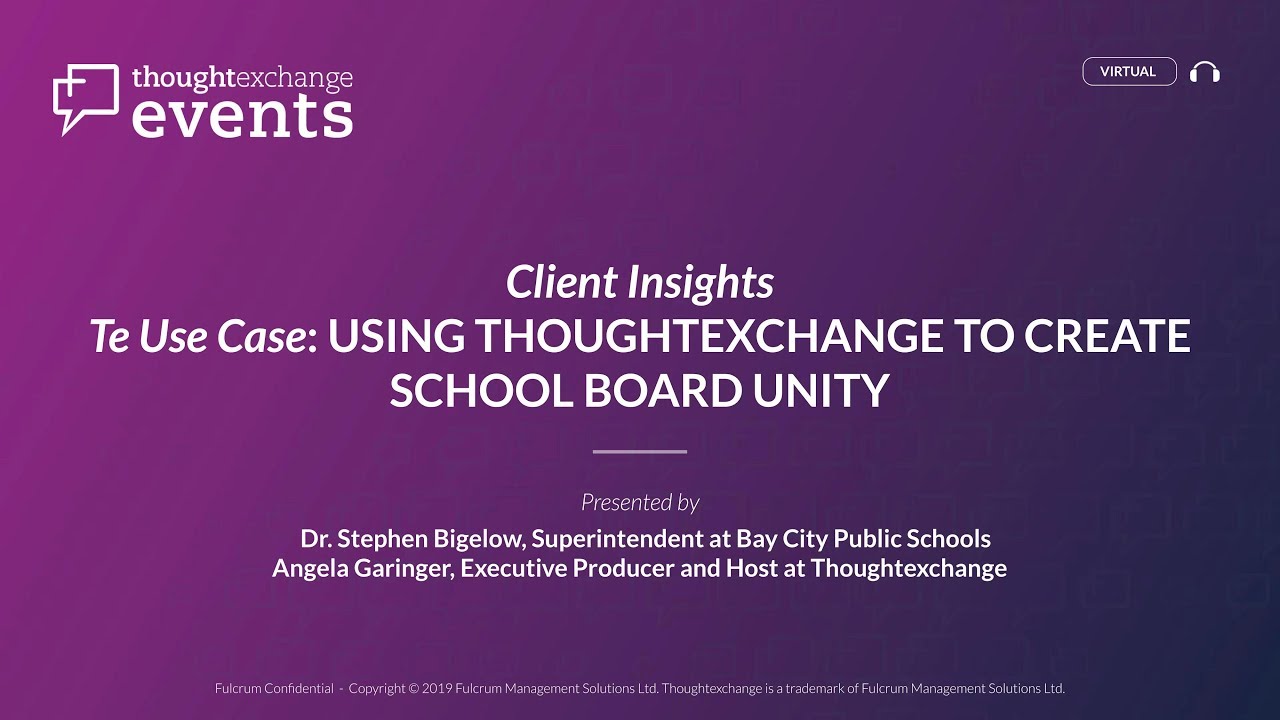 When Dr. Stephen Bigelow, Superintendent of Michigan's Bay City Public Schools, set out to move forward on a new strategic five-year plan, he realized he was dealing with a divided district. Communities within the 260 square miles encompassed by his district had entrenched rivalries based on east versus west and urban versus suburban.

His board brought this baggage with them to the table, which made unanimous decisions on district priorities difficult, and the meeting process lengthy. At board meetings, he found they were treading water because of the loud voices of some members and the quiet disagreement of others. "We had a dynamic where it tended to be the loudest voice on the board was getting the attention, but that doesn't mean it was the voice that makes sense for our district," Dr. Bigelow says.

Bringing the Board Together

In an effort to gain clarity on the board's priorities, Dr. Bigelow brought ThoughtExchange to his board retreat. In a short time, the board produced actionable goals for the next school year. The question he asked was: What are your top priorities for Bay City Schools?

With "What are your top priorities for Bay City Schools?" Dr. Bigelow designed a great question. Here's why:

READ: How to design a great question

In the space of about 20 minutes, board members could anonymously share their priorities and rate the priorities of their peers. That let the members who rarely spoke up have their say. "Nobody felt like they were not being heard in the process," Dr. Bigelow shares.

The board used the highest-rated thoughts to create four concrete points they could use to move forward with the district's strategic plan.

As a result, board members left the retreat feeling more invested in the plan. For Dr. Bigelow, creating alignment between board members had never been easier.

After the retreat, Dr. Bigelow took the exchange results and presented them at their Welcome Back district meeting. "Now I had what the board wanted to see, and I had it in a concrete way where I could present that to our entire district," he says. Presenting the board's goals to the entire 1,000 person staff of Bay City Public Schools was a huge success for Dr. Bigelow.

Instead of getting a generic welcome, staff were reassured and rejuvenated for the school year. They could see the board's goals laid out clearly, and how district policies implemented during the school year would align with the five-year plan.

"All the employees understood that the board and I were together on a team... but more importantly than that, they saw that we actually had a plan," Dr. Bigelow explains. That meant there was unity not only between board members, but between administration and staff.

Dr. Bigelow used ThoughtExchange to bring quiet voices forward and give all stakeholders a chance to be heard.

Here's why our software changes the dynamic from Loud to Crowd:

Check out our Use Cases to see how other education leaders are gathering actionable data in real-time.

He also wants to get ThoughtExchange into the hands of his administrators and teachers, so they can use the software to make a direct impact in their schools and classrooms.

On a larger scale, Bay City Public Schools has a $30 million bond election coming up, and Dr. Bigelow wants to crowdsource the highest priorities for district stakeholders to help his team build a winning bond package.

Instead of sending out a traditional survey as he would have done previously, Dr. Bigelow says ThoughtExchange will enable "a formative discussion with stakeholders where we're building upon one another's ideas," making it a thoughtful conversation rather than just collecting data. By communicating authentically with his stakeholders, he can drive a sense of unity among participants, and between the community and district leadership.

We're excited about what the future holds for Bay City Public Schools and the part we can play in bringing unity to the district. Dr. Bigelow sums up his experience with ThoughtExchange best when he says, "it really was a miracle worker for me."

Book a Demo today and find out how ThoughtExchange can help you create unity in your district.